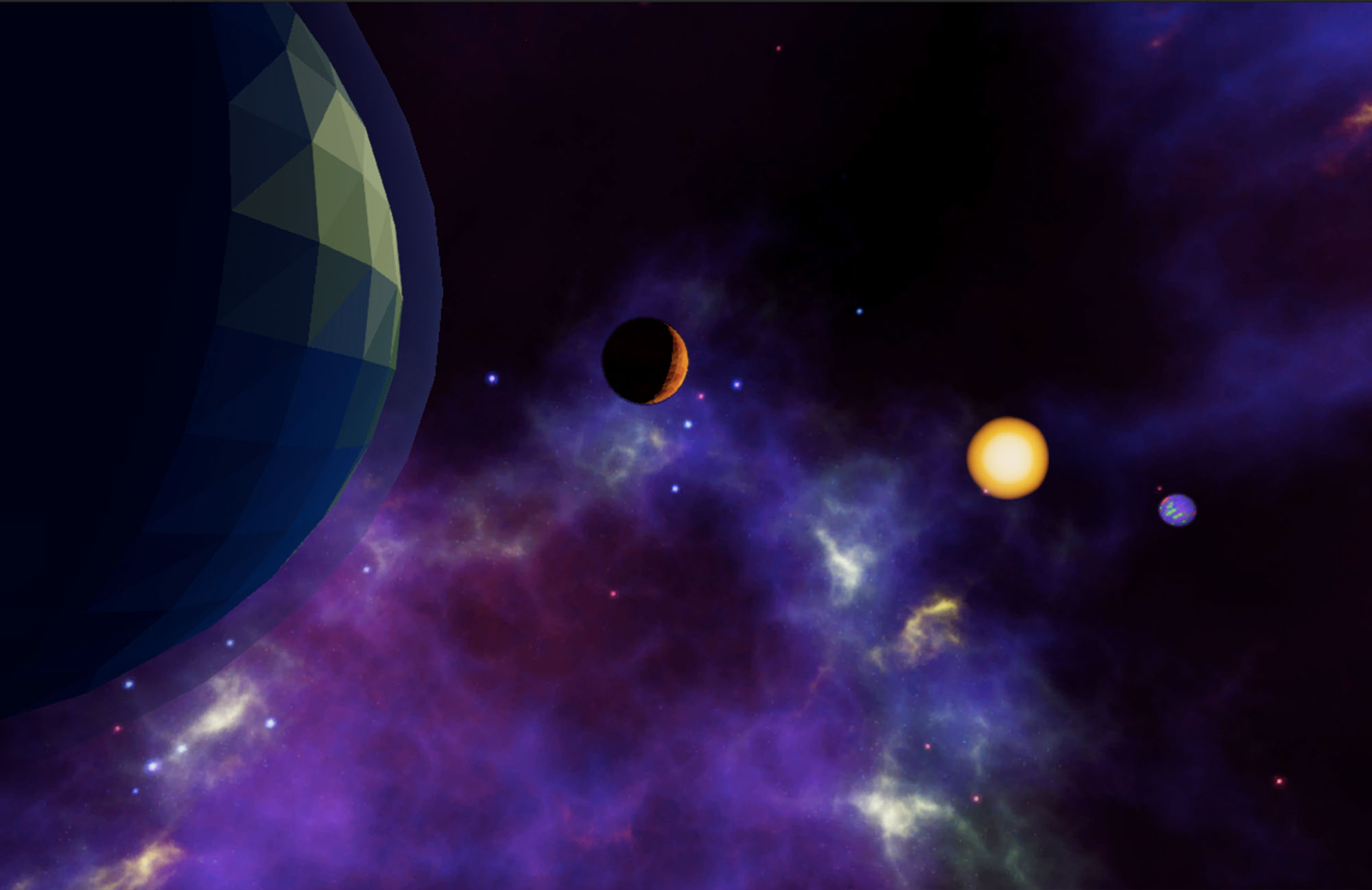 I have had so many ideas for this game that I think I have cut out a good two years worth of work for my self. I had a list of about 160 features, mechanics and environments to implement ranging from black holes and supernova's to banana themed space cafe's and intergalactic radio stations. I've been properly developing this game for about a year and I have had three prototypes out for testing.

Oceans have previously had no idea where land was in relation to waves so they would often clip into the terrain mesh. The ocean system samples the terrains heightmap to determine how large a wave should be. What I've currently implemented is very basic but it works for now.

This is a bit DOA. I have struggled with procedueral stylised clouds for months. Cannot work out a performant way of doing it at all.

I had a play around with HDRP I think it looks nice but I feel like I'm losing some of the stylised charm. Probably wont stay in HDRP but I'm glad I tried it.

This does not yet support 3D terrain with caves and over hangs but its a step in the right direction and a step towards realtime procedural planets.

After falling down the water shader rabbit hole I'm damn impressed that I even got something looking remotely as nice as this. 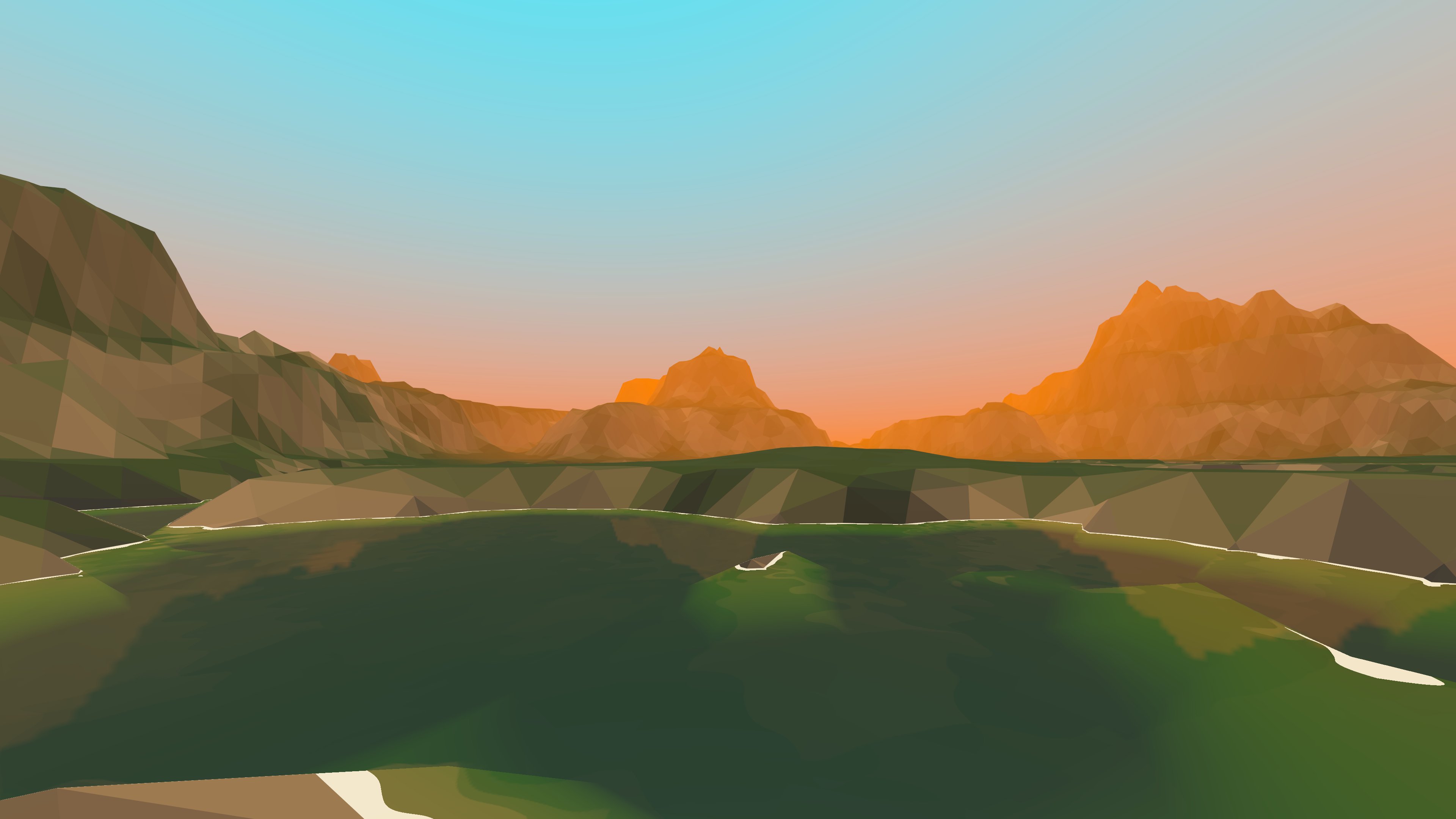 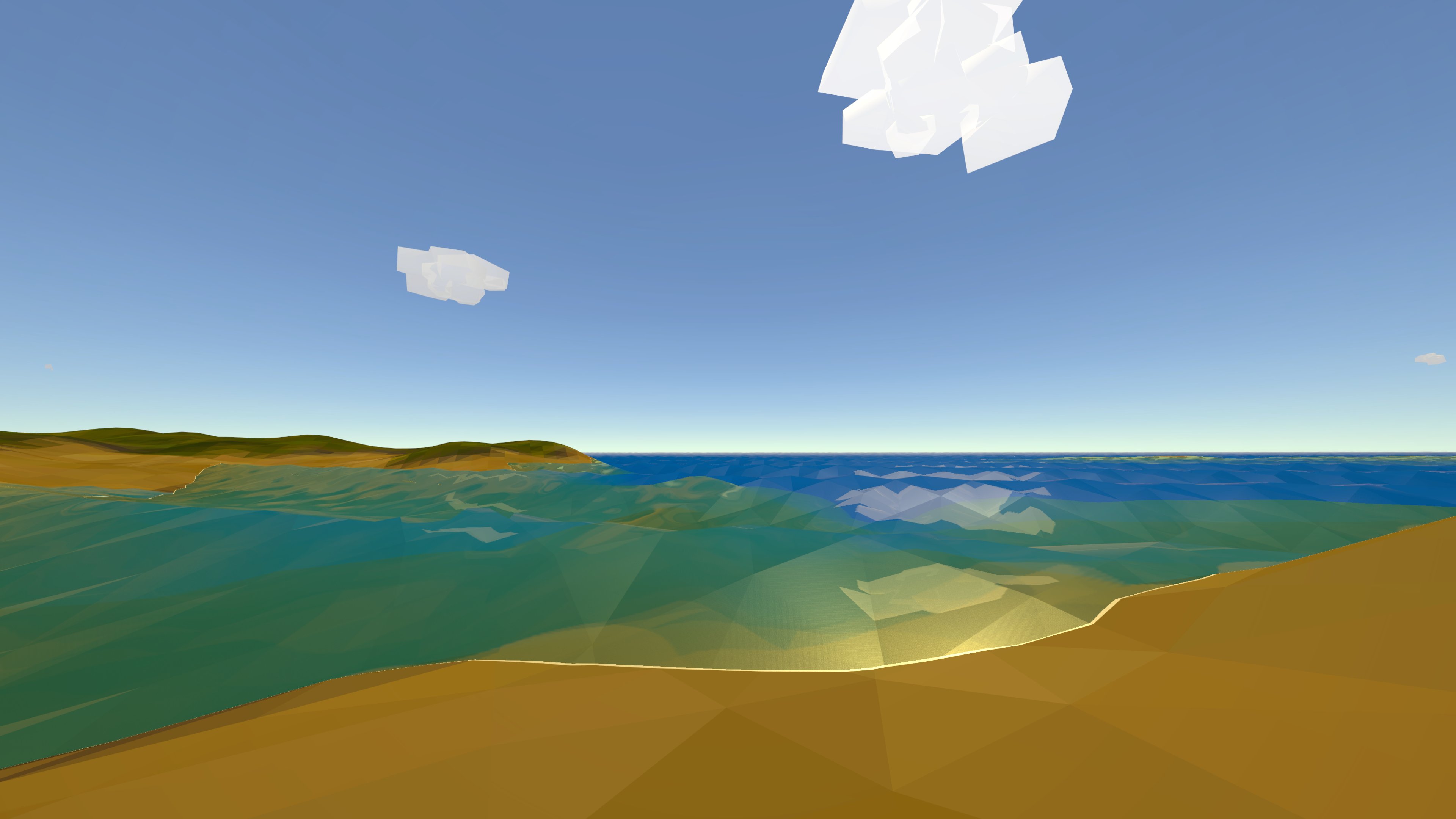 Ditched Photon for Mirror by Vis2K. Instead of all players having a peer to peer connection to a host player, all players will connect to a hosted game server. The main reason behind this decision was the scalabilty that comes with hosted servers. 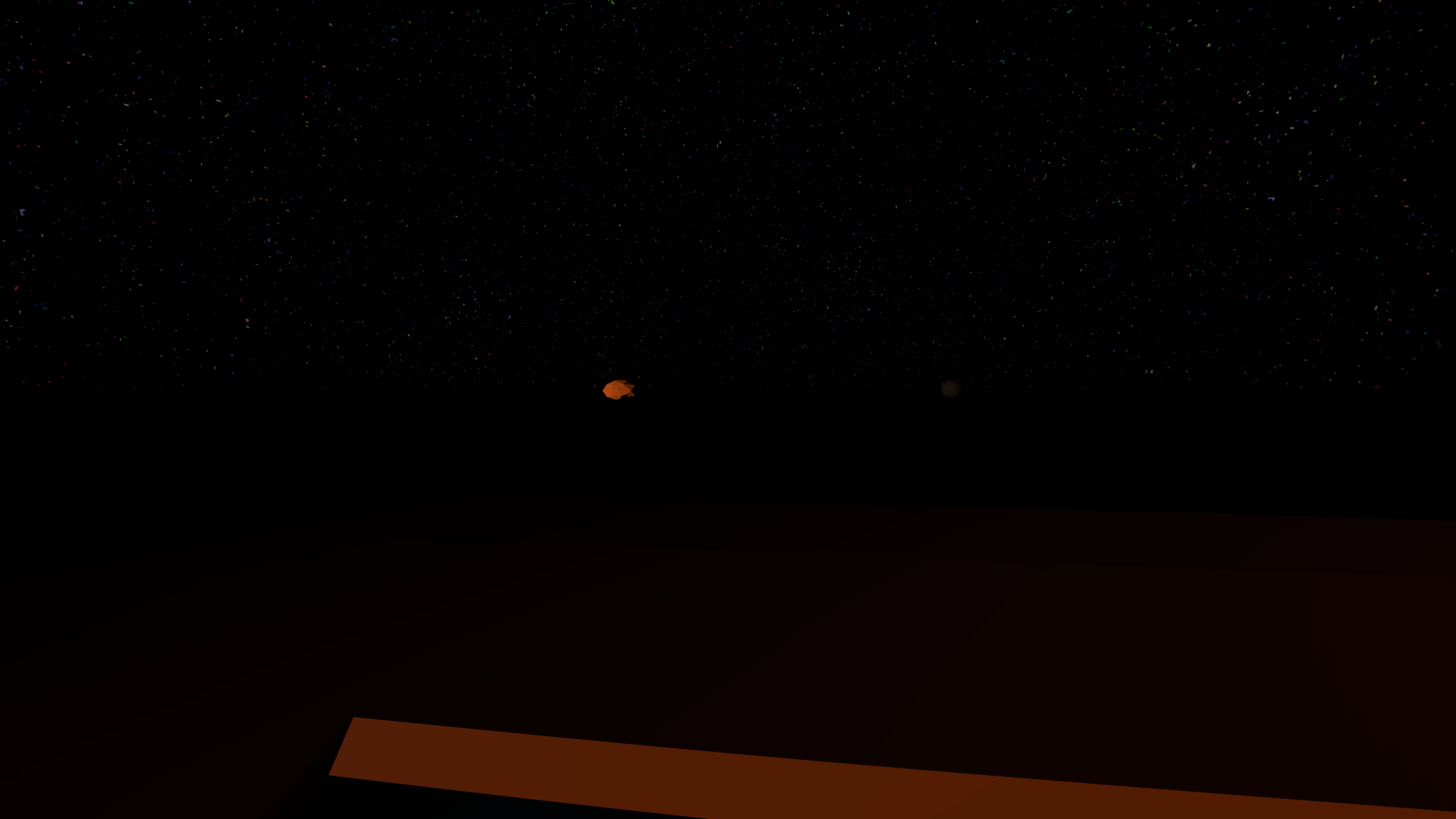 Over the last 2 years of prototyping and experimenting with this project I have gained a better understanding of game design and have a clearer vision going forward for what I want this game to be. 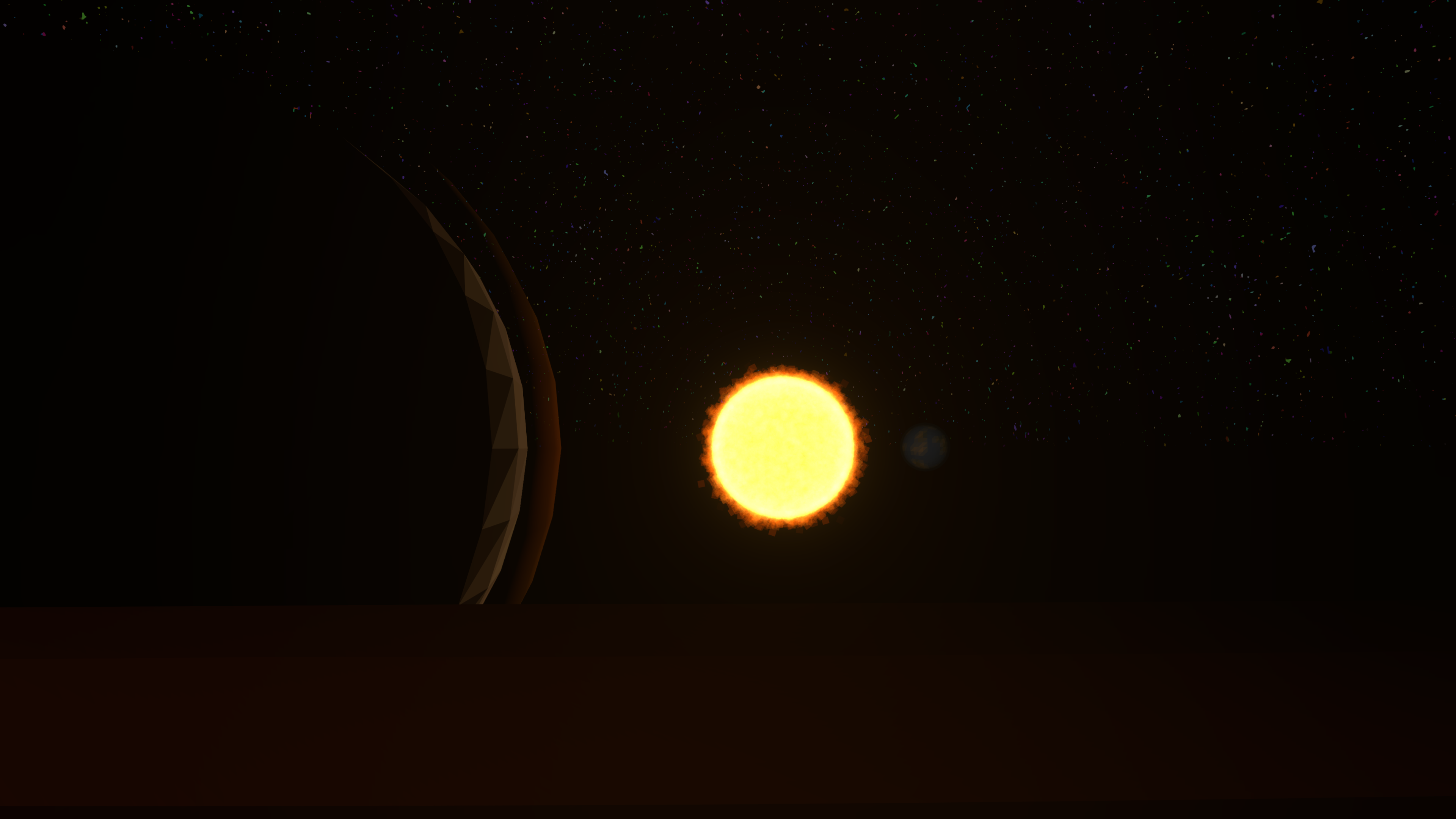 Flashlights are boring, meet BIL. When things get dark BIL will be there to light your way. (Building, Information and Lighting). 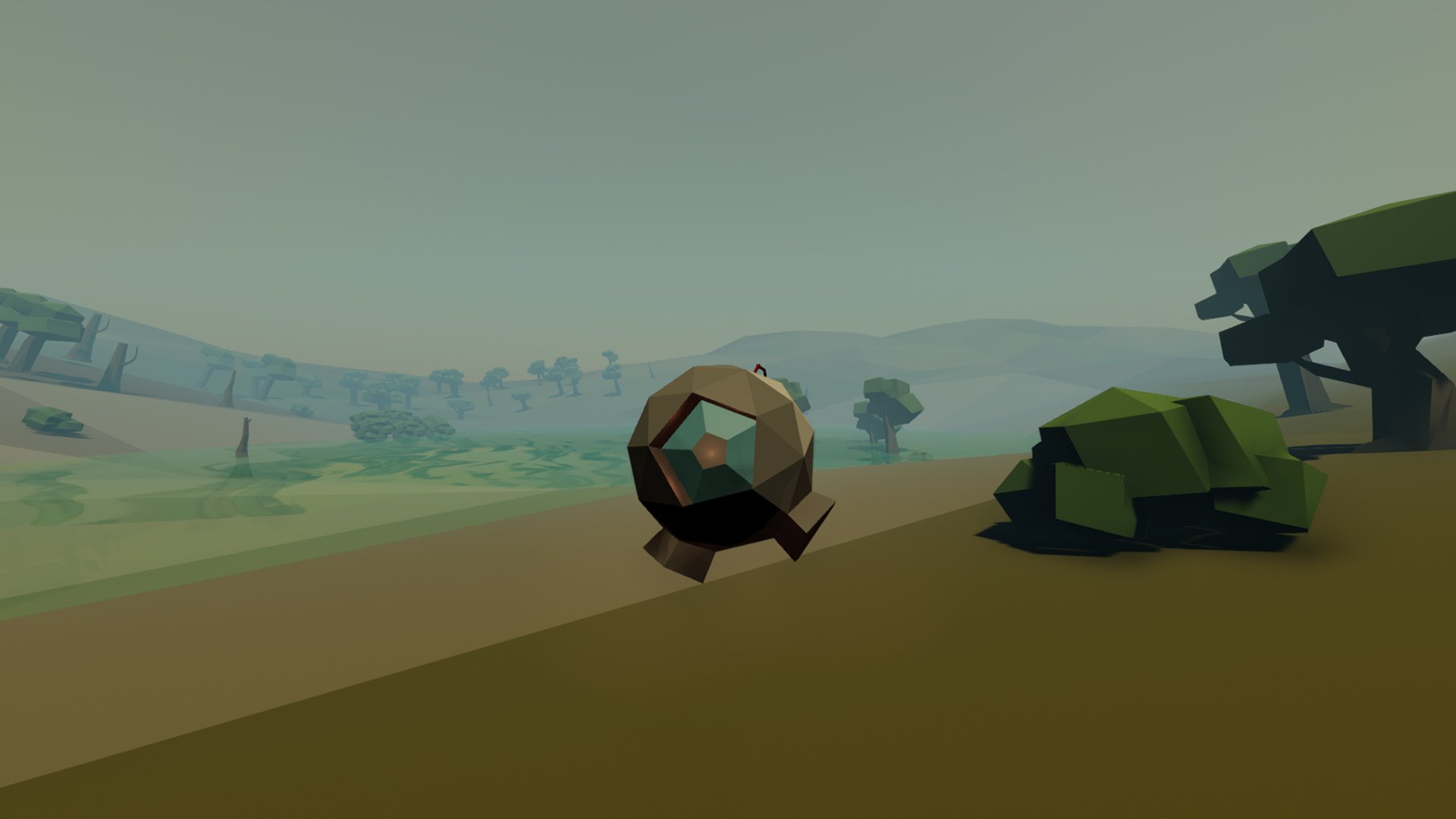 Starting adding a weather system. Here is my first attempt at sandstorms. 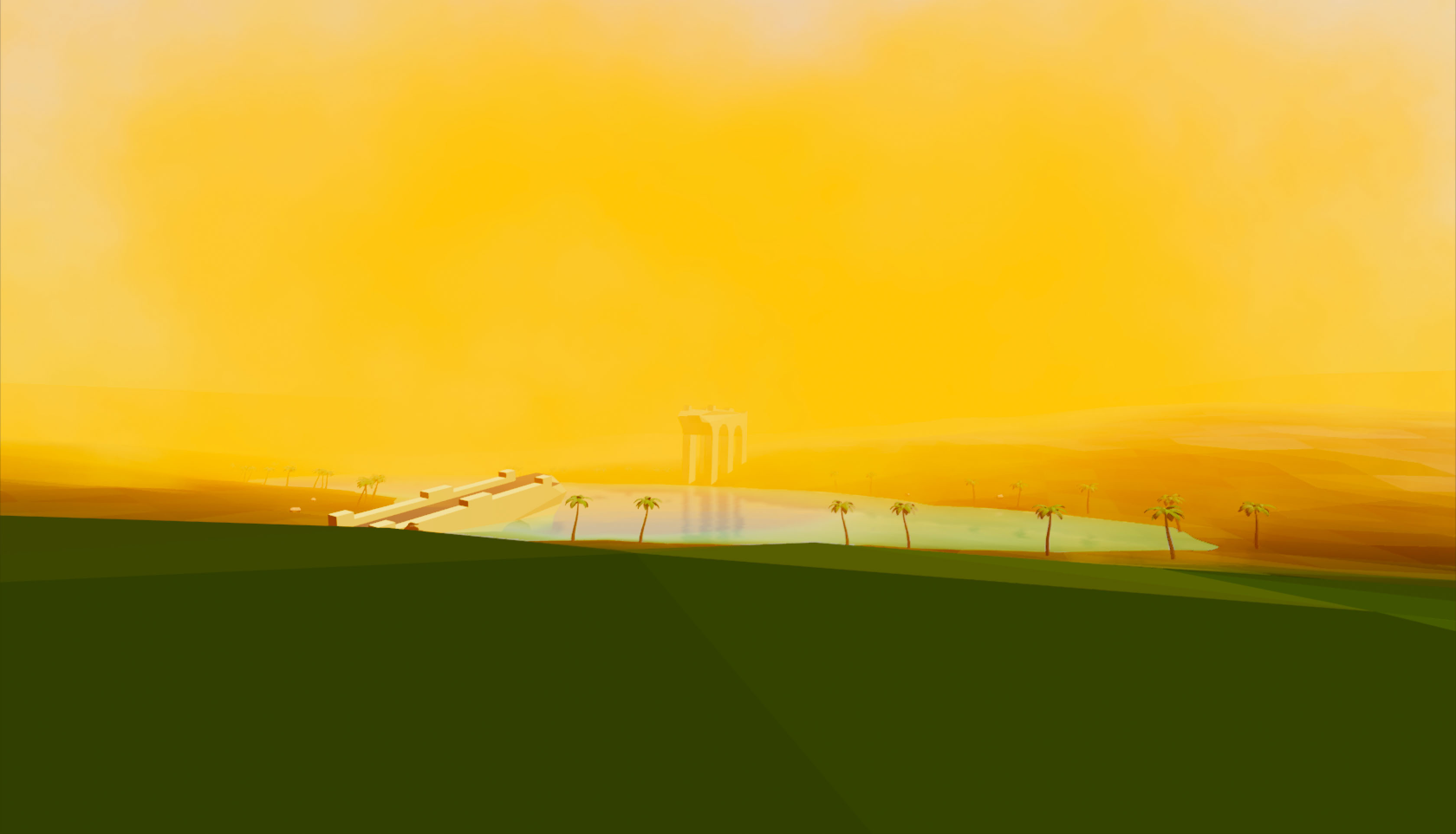 The second solar system in the game. The Vanitas system has 1 small planet and 2 large planets orbiting a red giant star.

Crates on planets now start off with loot to be found by players when exploring. 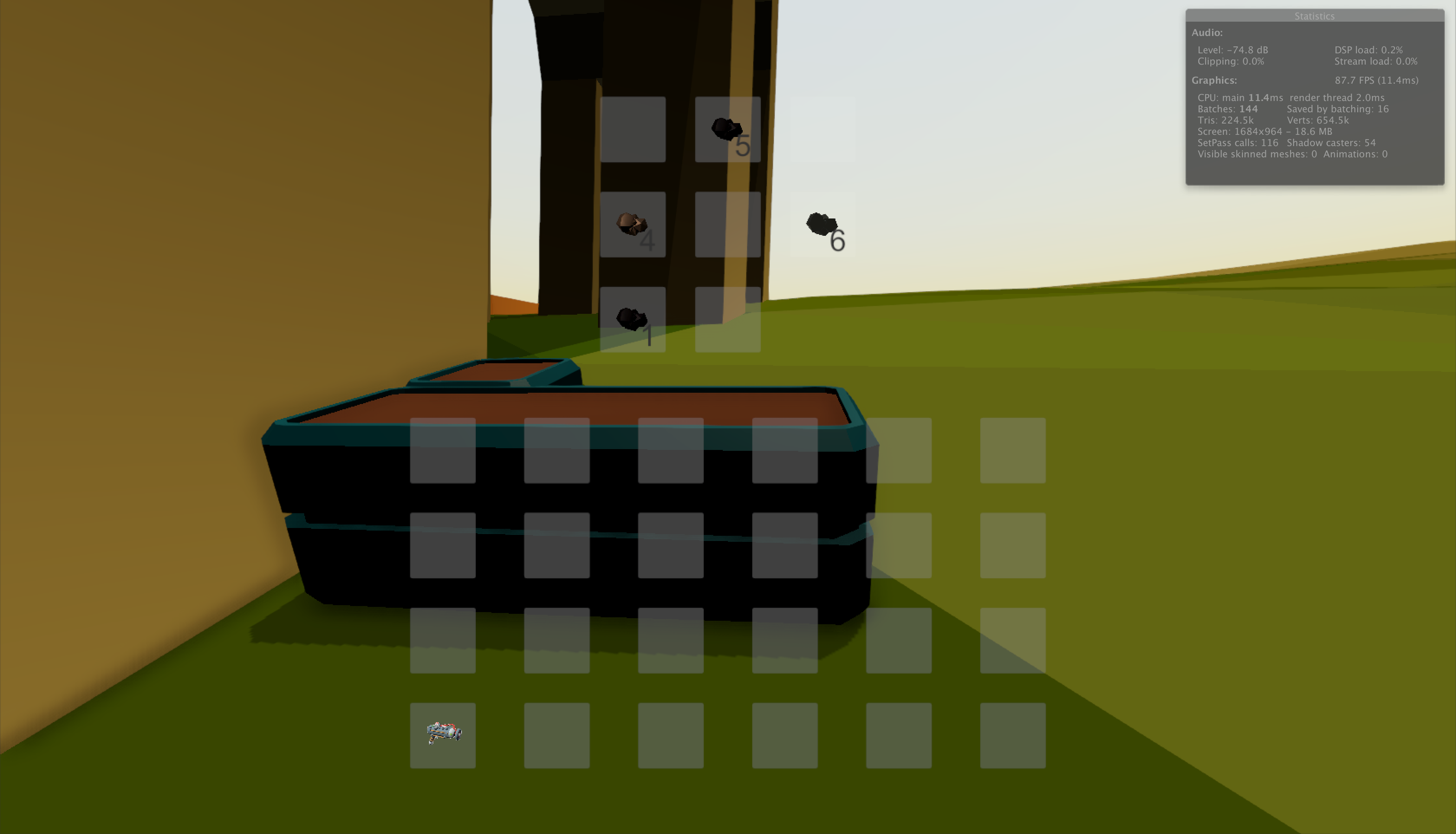 Ship lockers! You can now store items on your ship as well as on planets in crates. 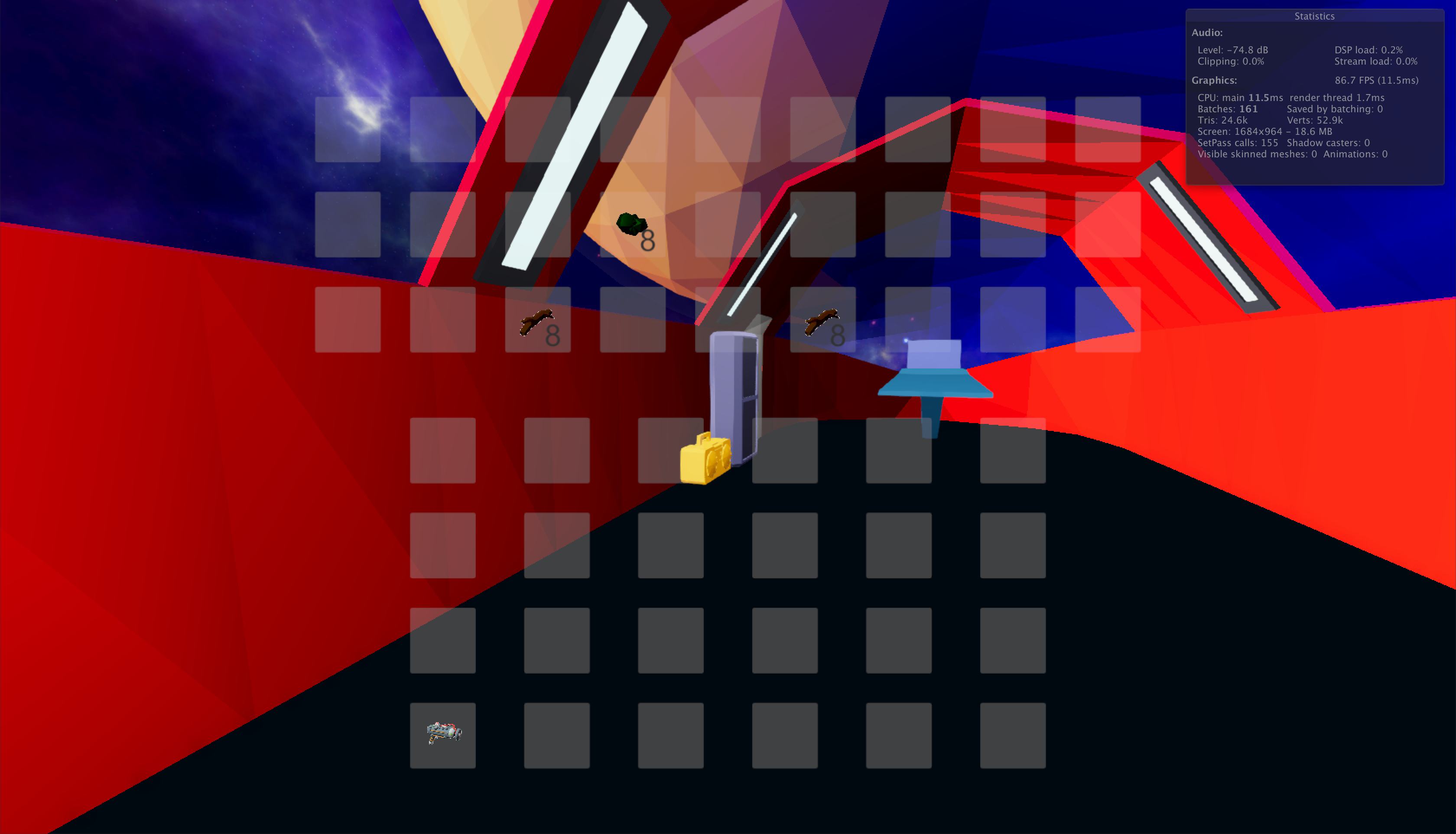 Third planet in the Initium solar system. This planet is the most "earth" like planet and it's big enough for me to experiment with biomes in the future. 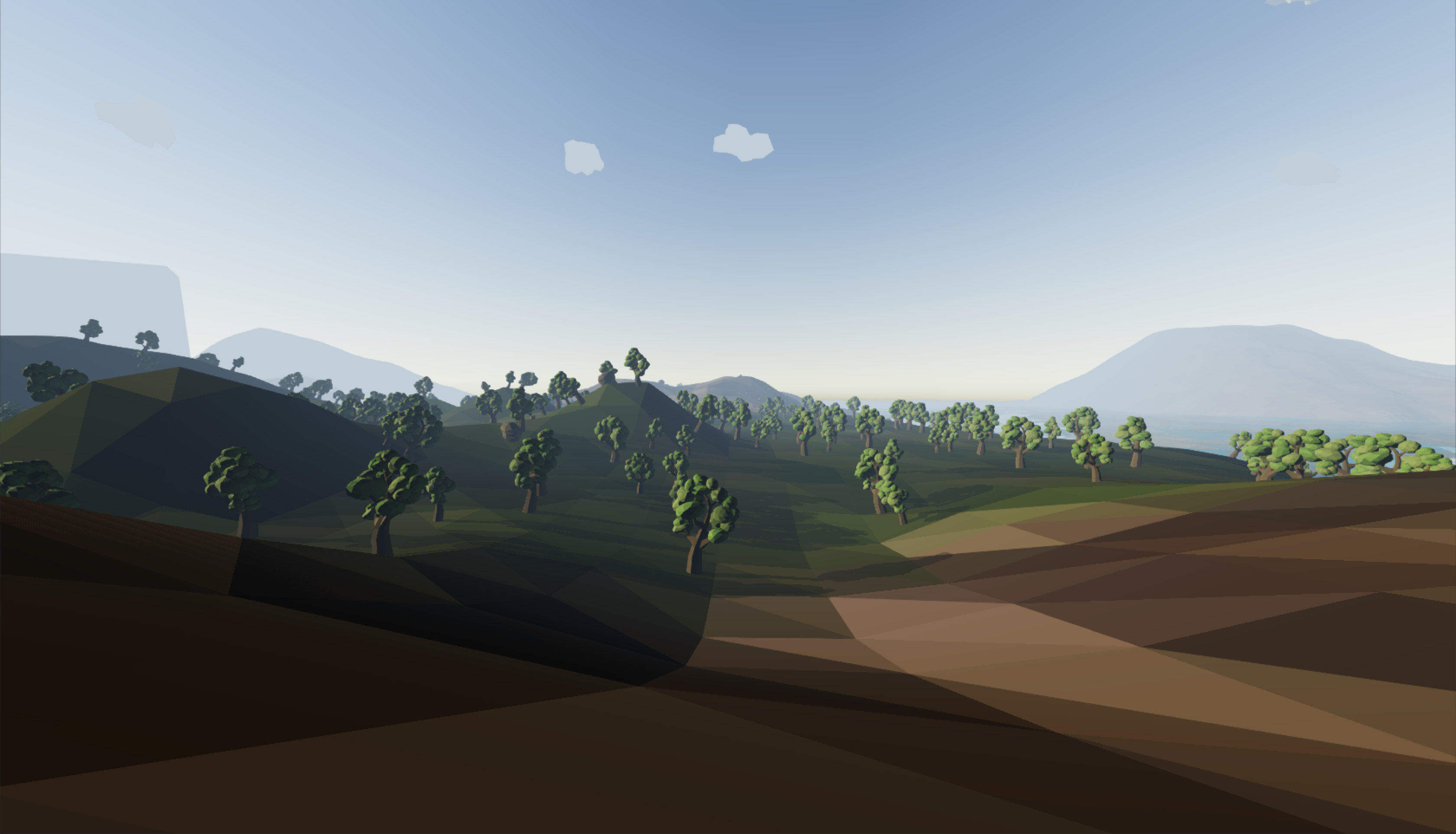 Actual Gameplay now. Only a few to test the system. Gather resources to repair your ship and leave the planet. 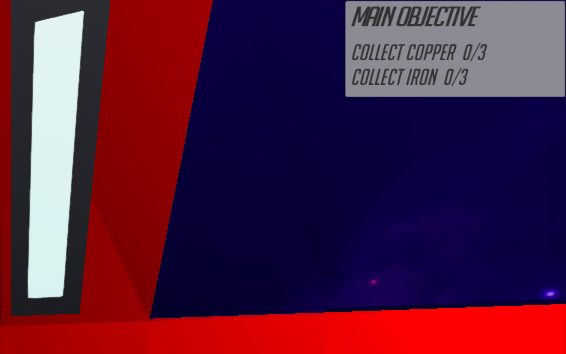 Vehicles are getting there thanks to the help of a friend who spent a few days fiddling around with wheel colliders for me (yep they still suck). I'm still working on the script that allows the player to get in and out of the vehicle. 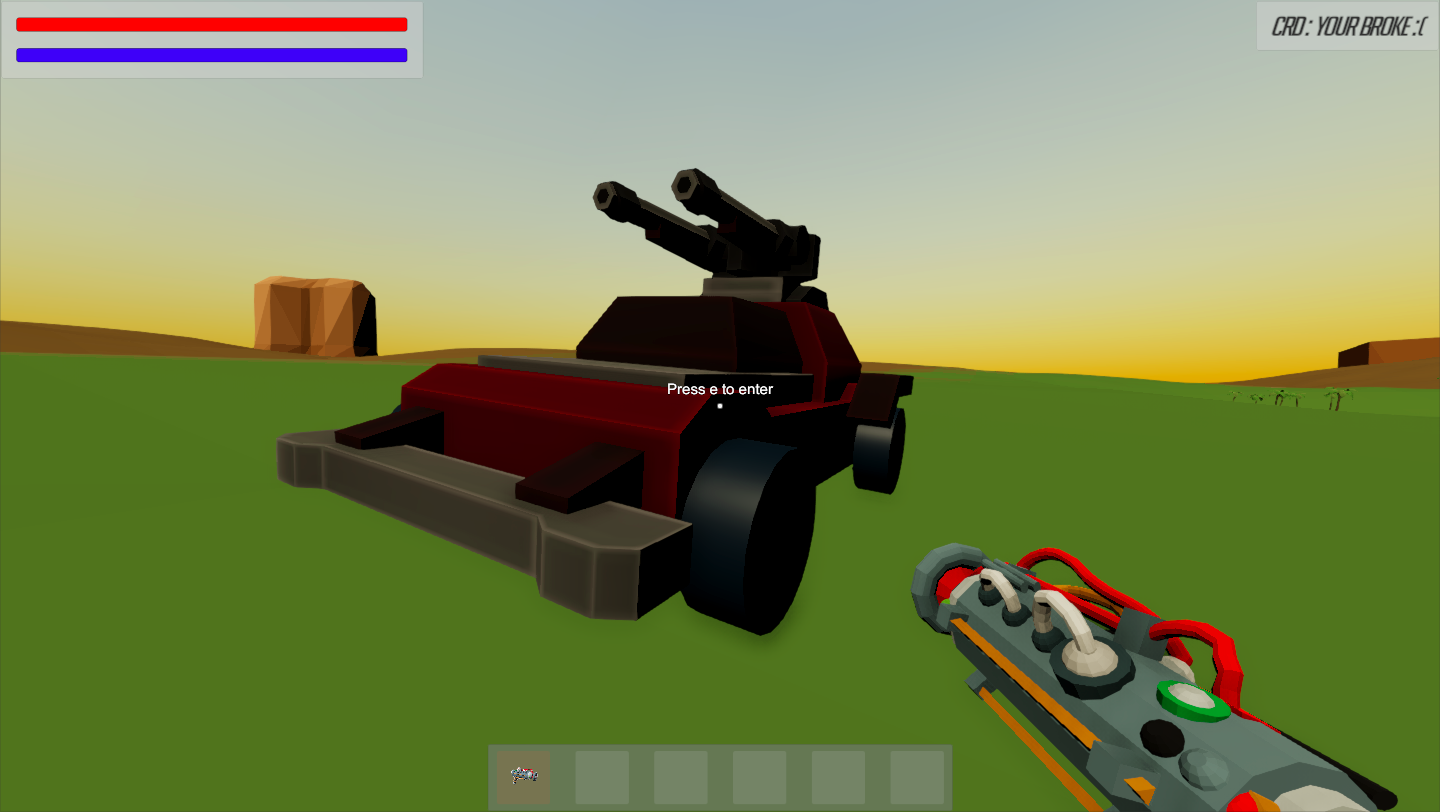 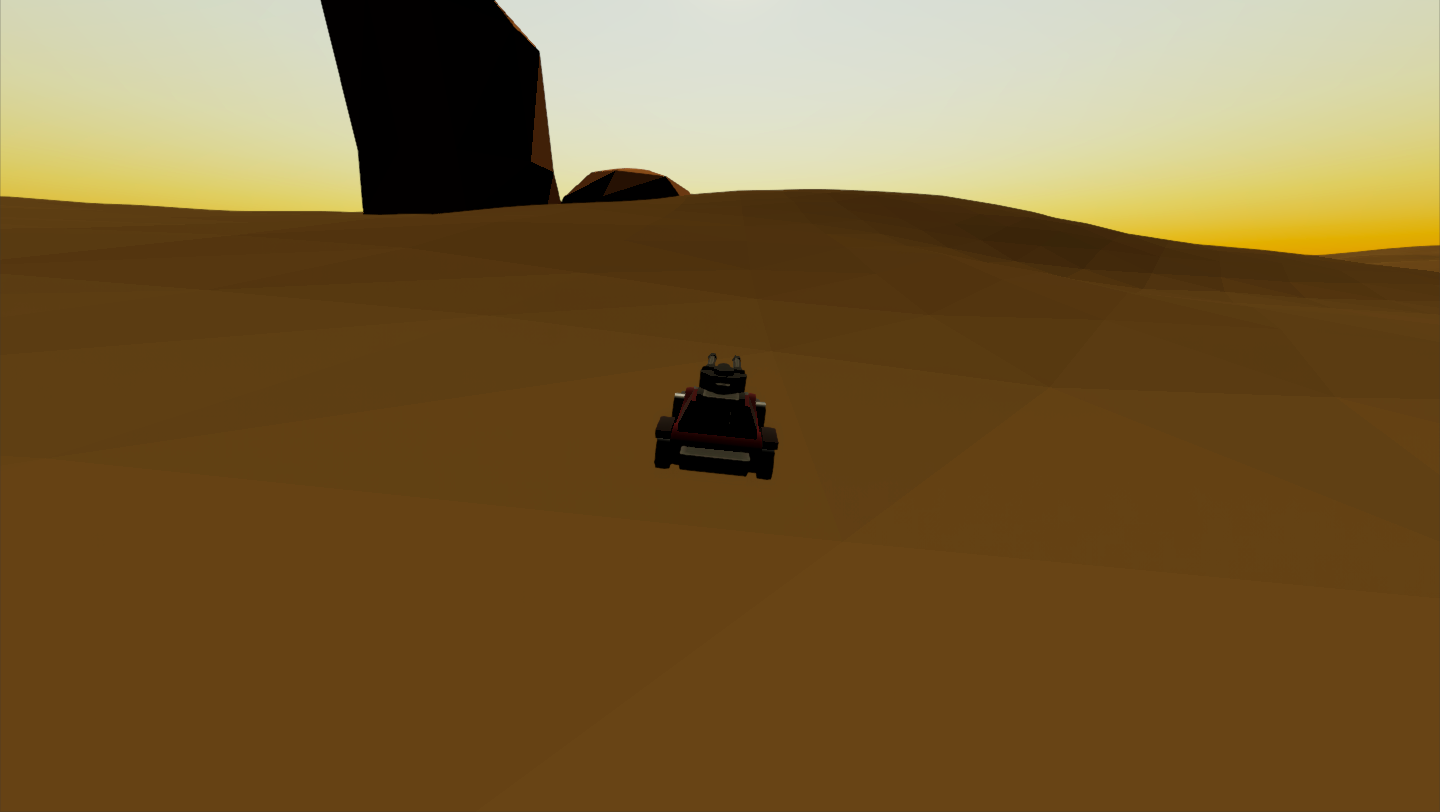 Not a whole lot this month, mainly just bug fixes: 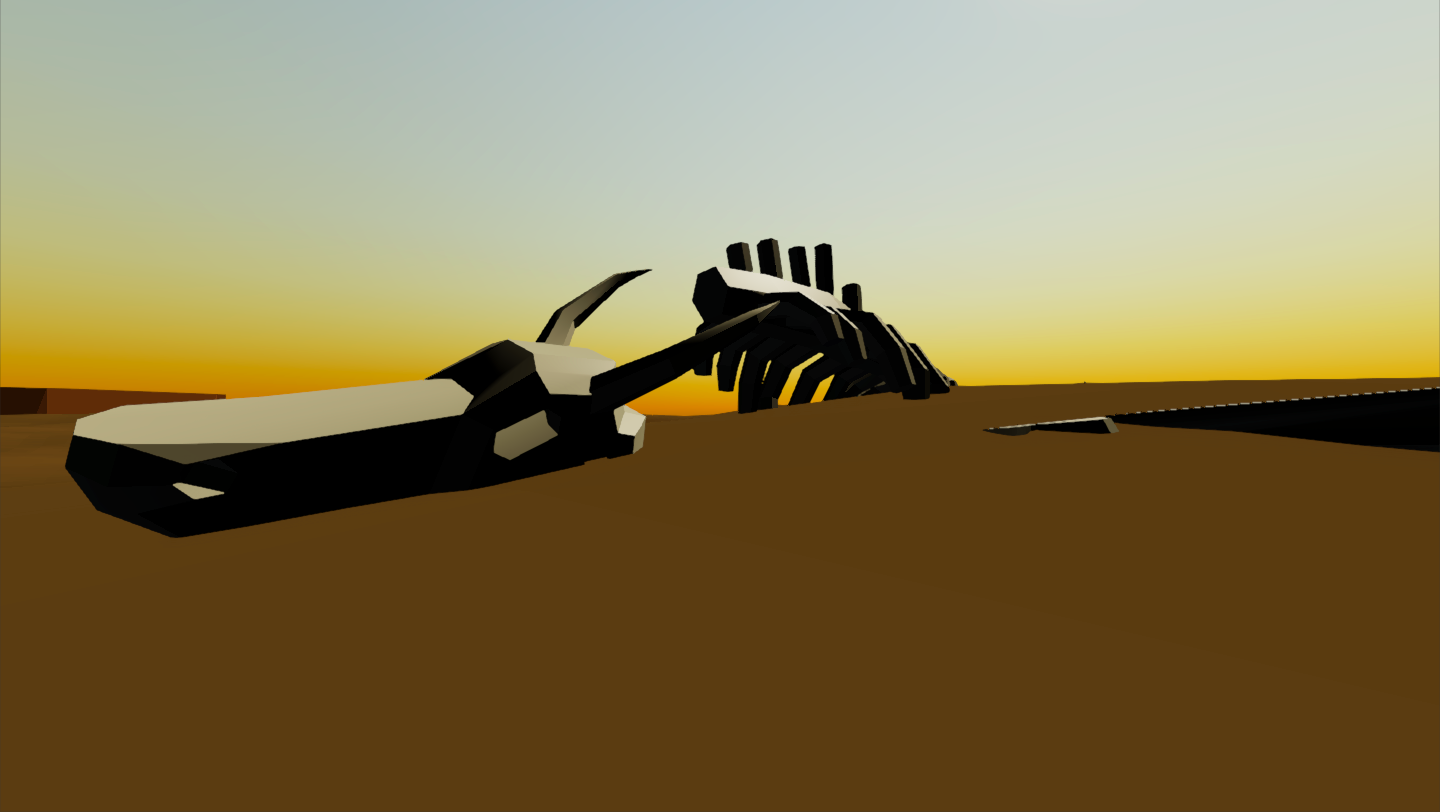 Ok so at the moment when you break a resource it only stays broken for that session. If you quit and come back the resource will have returned (unlimited materials). So to fix this I added uid's to all default resources and a quick check on the master clients save data to determine if the resource should be destroyed or not. 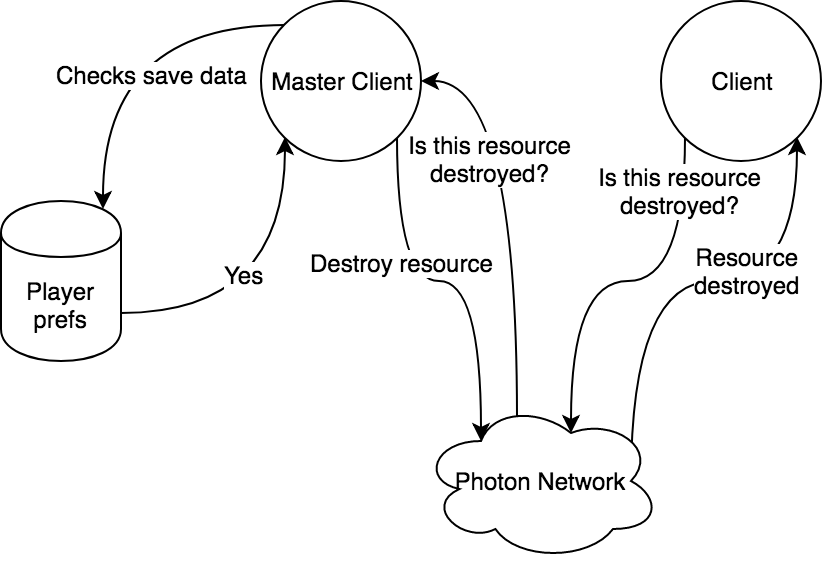 It's such a small feature but it feels like I made a massive leap. You can equip items in the inventory and hold them in the hotbar. Numbers 1-5 control which slot is selected. Press q to drop the item you are holding.

Giant flower forests, purble oceans and a gorgeous sky. Looks like something from a Dr Seuss book. 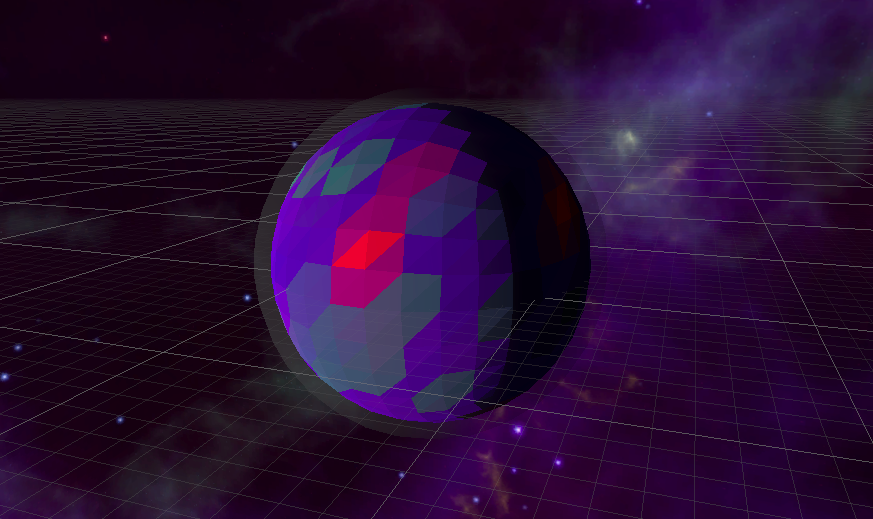 Now that the multiplayer prototype is done I can continue moving through this massive to do list.
Major multiplayer improvements and more: 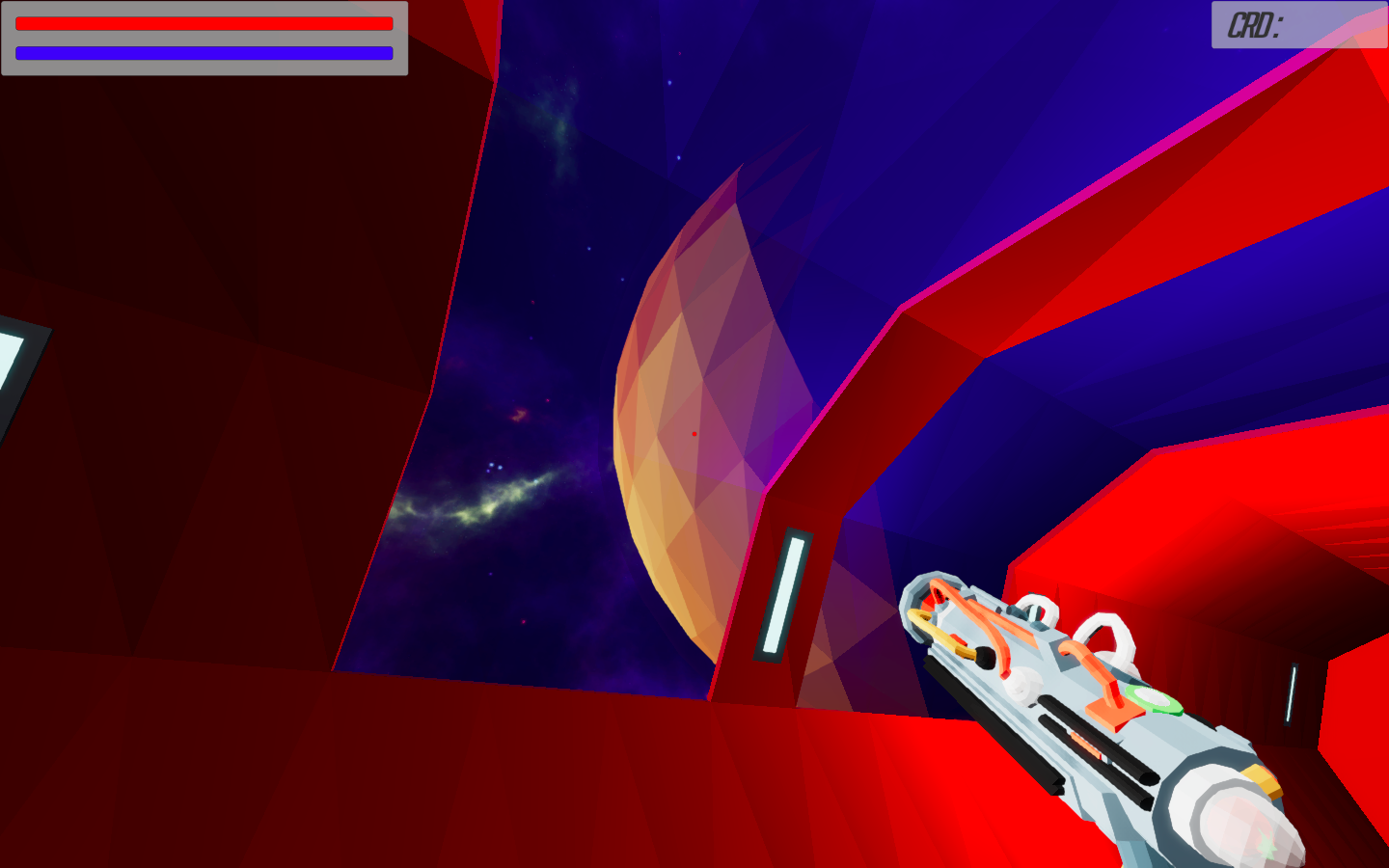 A really satisfying tardis effect made using smooth portals. Maybe a ship idea but I doubt it will work in multiplayer. *Edit* Nvm it worked really well in multiplayer.

Basic multiplayer has been added.
Players can see each other and drop and pick up items but not all world objects are synchronised. And yes you are a space potato. 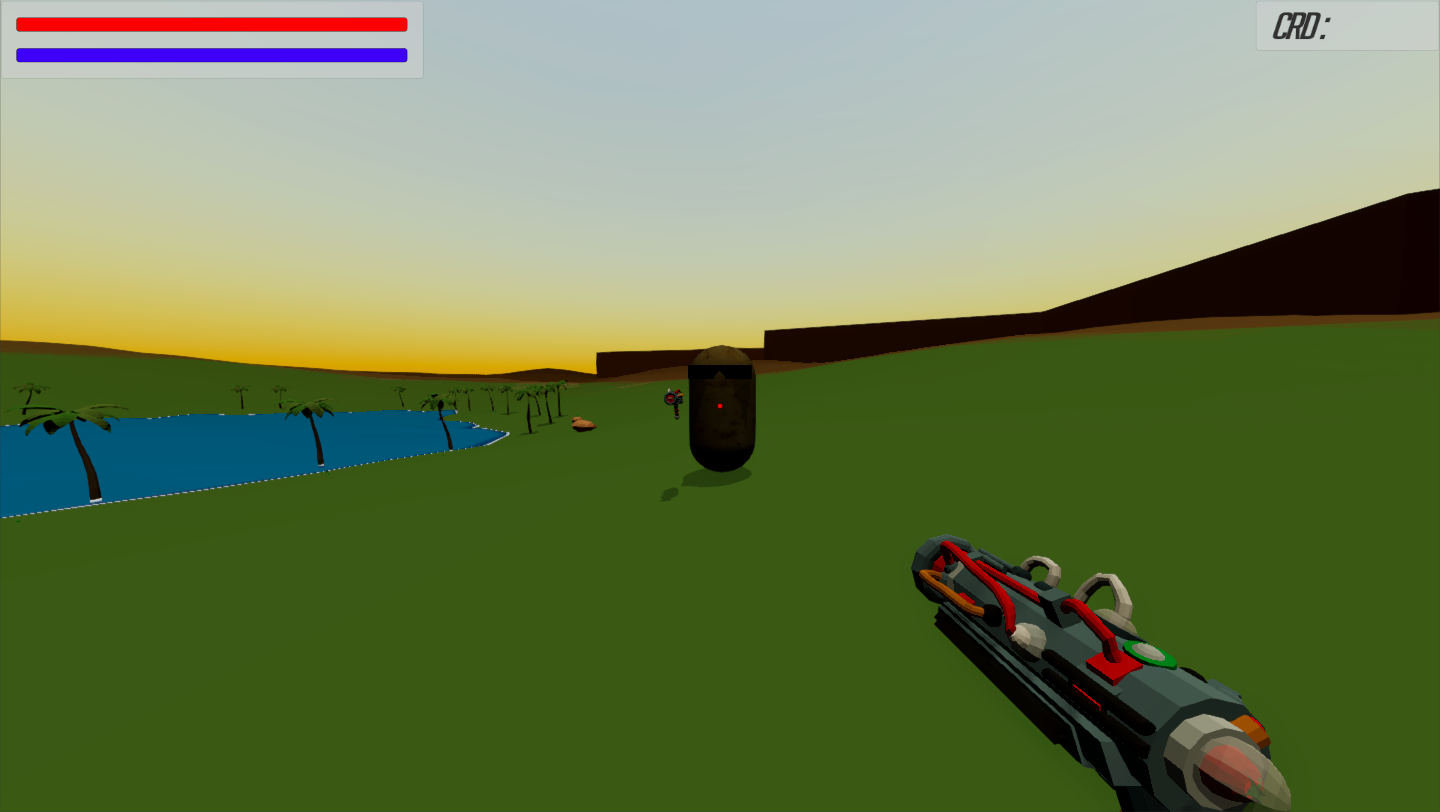 Feedback from version 0.0.1 has been taken on board and applied: 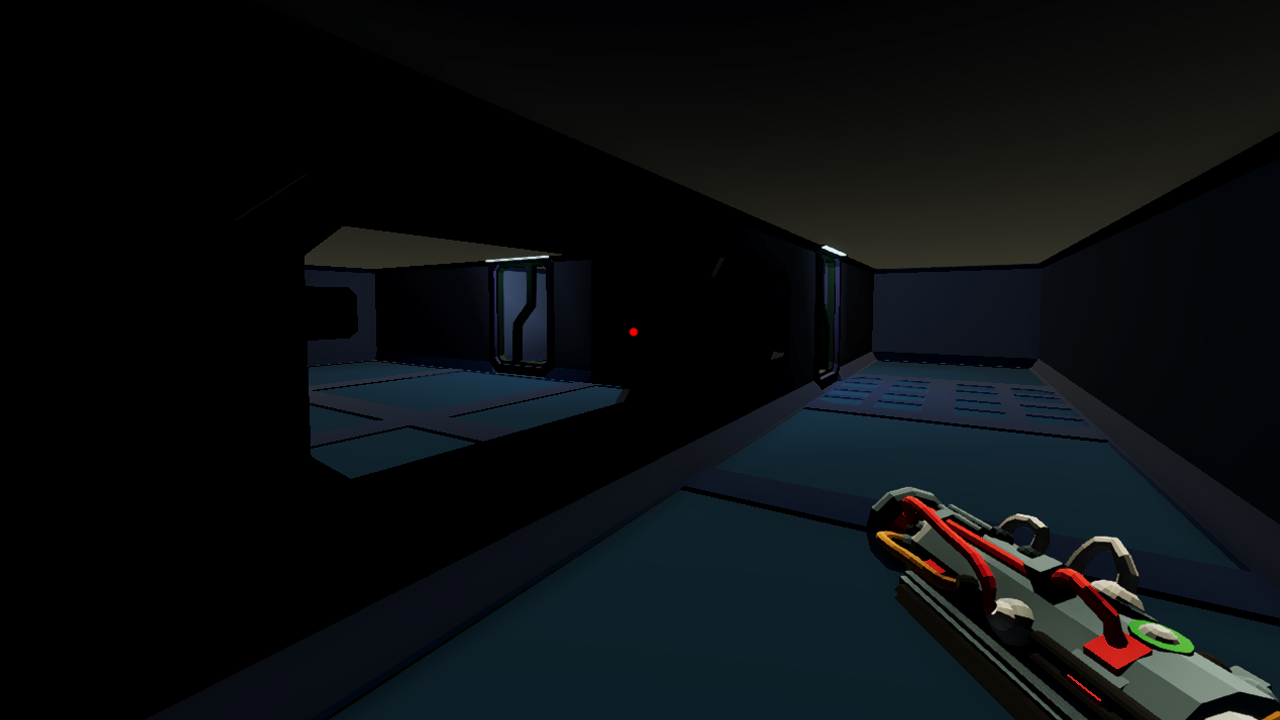 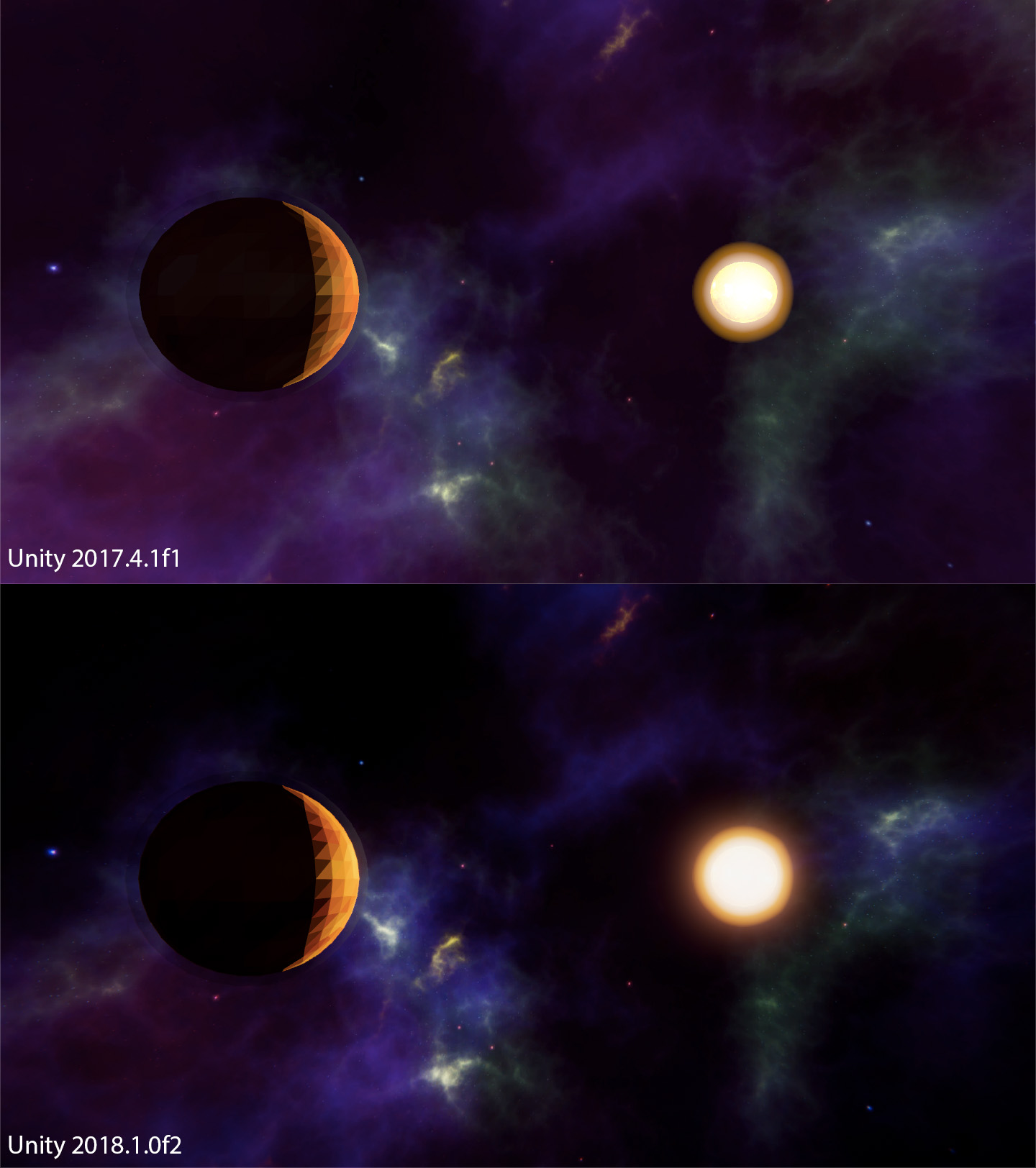 Under water effects and temporary water physics. The Player should feel slower in water and experience some bouyancy. 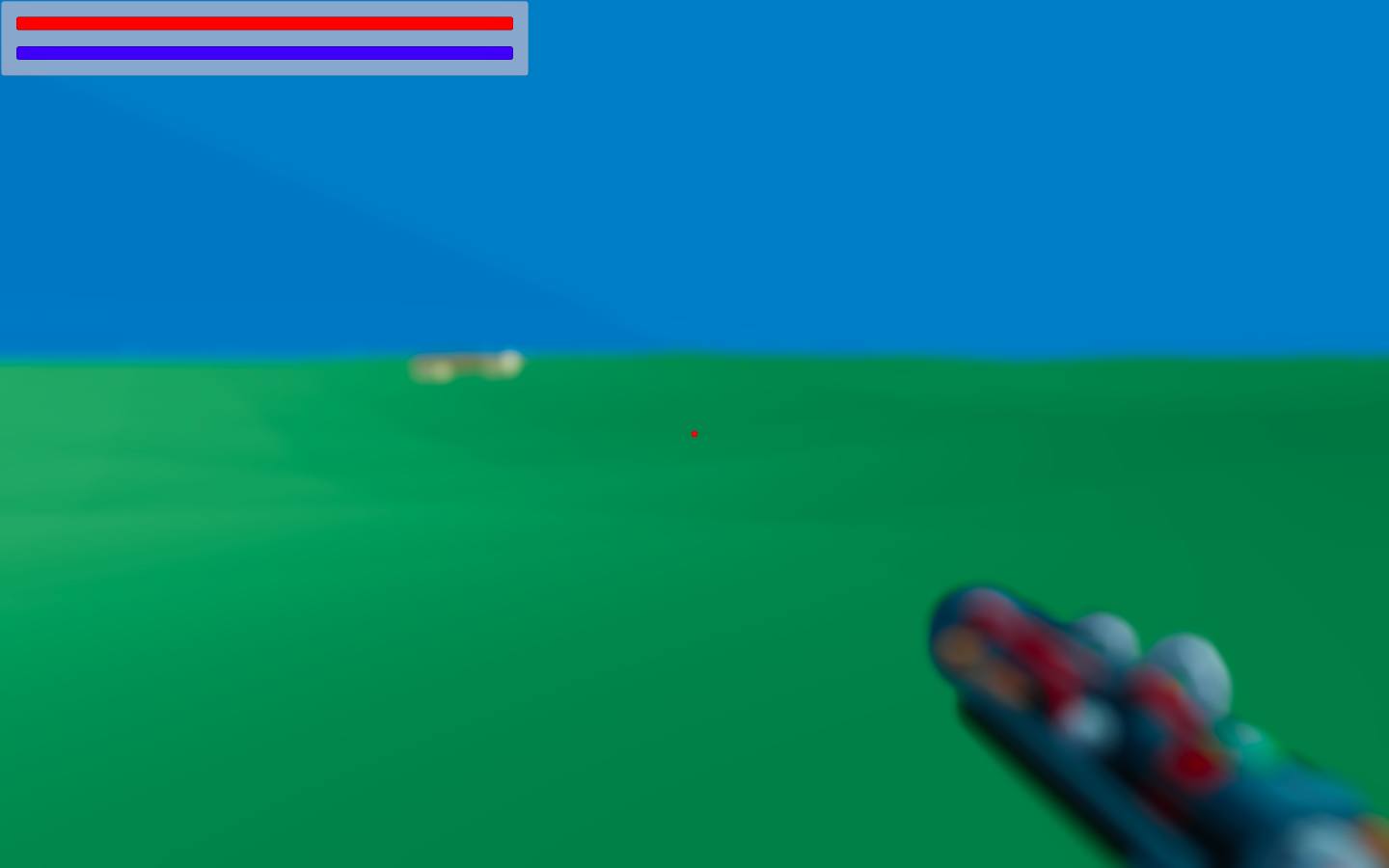 This is a demo version. Meaning that only the core features are enabled for testing, the rest are disabled.
Enabled features: 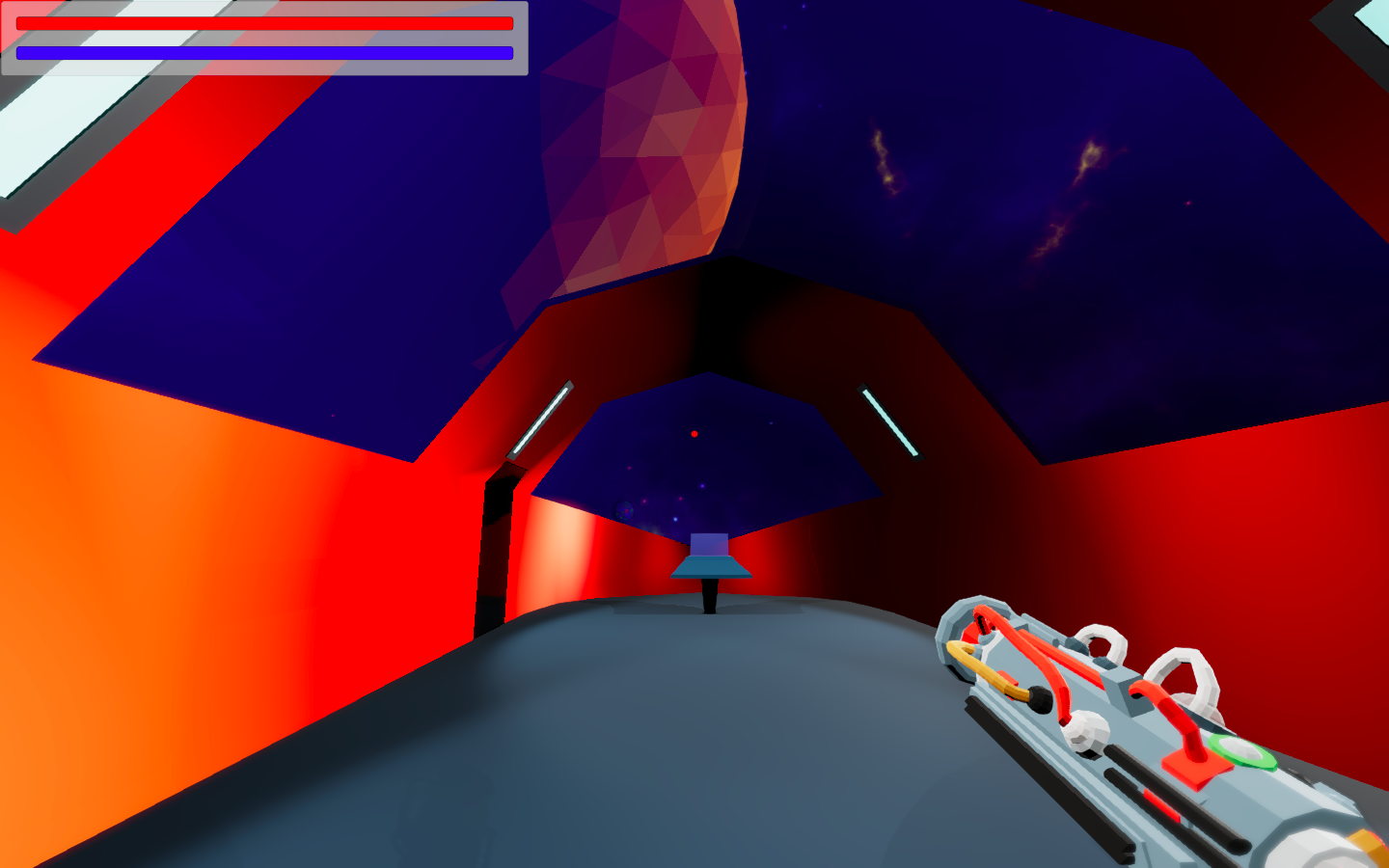 This means items with the stackable attribute enabled will occupy the same slot in the inventory. 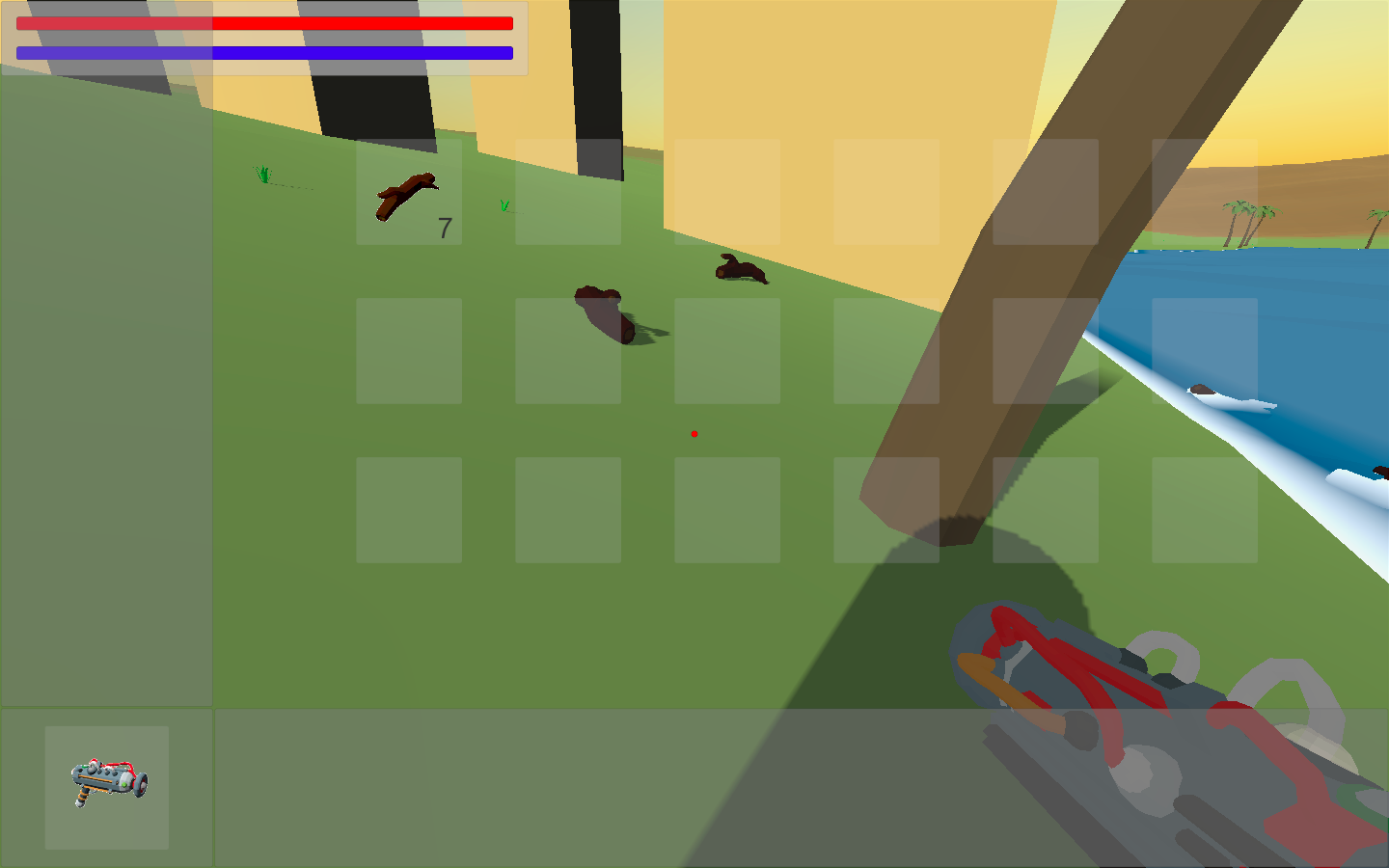 This unloads every mesh thats 1000+ metres away from a player. On average frames increased by 6% with a peak of 12% and a low of 3%

One of many areas that the player will be able to explore around the planet. The oasis will provide the player with resources that would normally be difficult to get hold of in a arid, dry desert environment.

First Planet in the Initium Solar System, "Initium A".
Initium A is a dry and arid desert planet with little life. A perfect place for the player to learn how to use the controls. 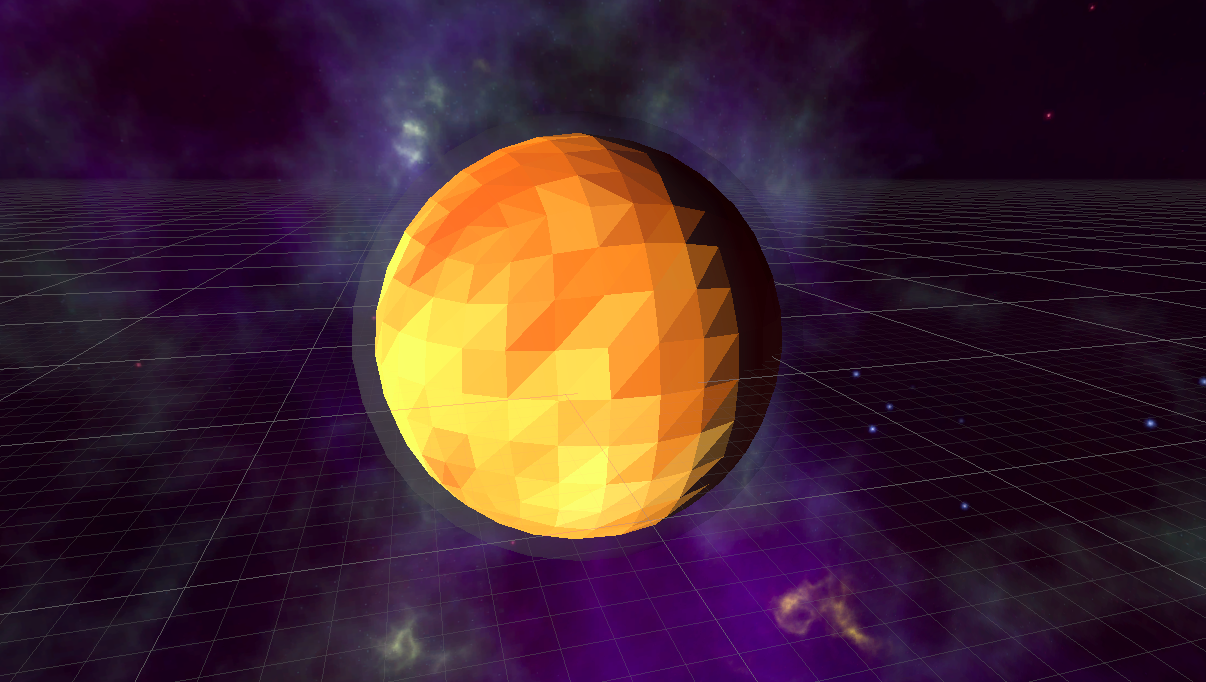 Created an Inventory that saves and loads across scenes using prefabs. (ignore the icons they're place holders)

Got to work on starting the survival inventory. Thought out the required features and started planning how the inventory is going to save and load data cross scenes. Player Prefs is not ideal and will almost certainly be changed in the future but for now it will do. 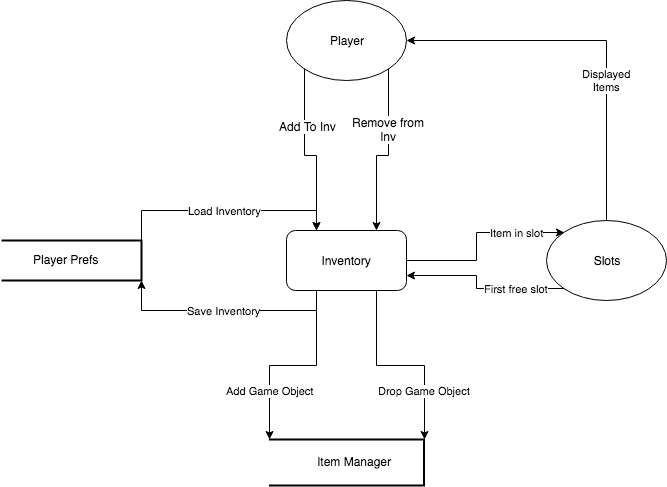 Interstellar Exploration is being tested on version 0.0.4 released on 26/09/2018.
Update included:

Save the destroyed resources and any other changes.

Crates and lockers that the player can use to store items.

Actual gameplay would be nice.

Sound effects and noises made by players and the environement.

Travel to new planets and explore.

Beaming Up and Down ✓

Teleport from your ship to the planet below and vice versa.

Allow the player to customize the interior of their ship.

Allow the player to create bases on planets to store items in a safe location. May also need to add waypoints with this feature. 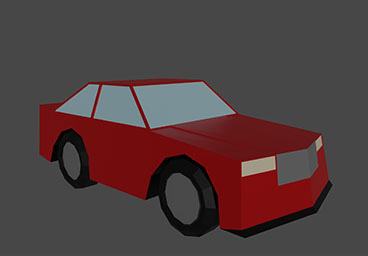 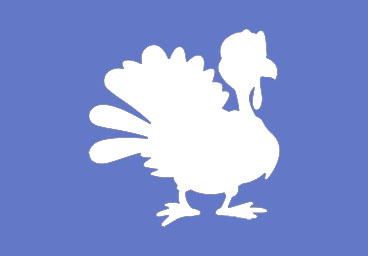 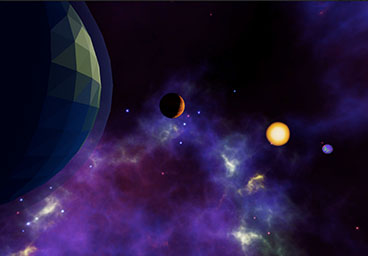